SIBU: Chen Ing Kuan has a dream to put the town’s performing arts on the world stage and hoped Sibu International Dance Festival (SIDF) could make it a reality.

Ever since SIDF started in 2012, it aimed to serve as a platform for participating groups, local and abroad, to share their knowledge with one another.

The inspiration started with a simple charity show Chen did in 2011 with the Sibu Autistic Association (SAA).

Chen, who is the artistic director of Hornland Dance Theatre invited two troupes from West Malaysia to perform at the show.

After the show, a short discussion between the audience and the performers and choreographers followed.

“I found out that such programme is beneficial to the people who like dancing and performing arts; and there could be some teachers who might want to learn about the different dances and cultures, and that really inspired me to think if only we could have a dance festival for Sibu folks,” he enthused.

With a few other charity shows that followed, he found out that Sibu has so much more to offer other than the performing arts, which is the beauty of Sibu.

“One time, we invited two Australians to do a workshop in our dance studio. We brought them to visit the longhouses, the Rejang River, and they were so amazed; the kampungs, everything about Sibu, they like.

“After that, we also invited teachers from West Malaysia and they had the same feedback,” he said.

However, as not many people knew about Sibu, he realised that Hornland Dance Theatre would not have the ability on its own to promote Sibu to the world.

He realised community effort is needed to make it all possible. 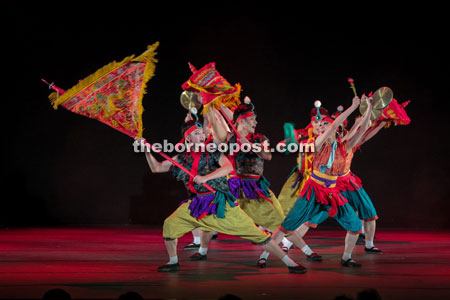 For about a year, after talking to people about their ideas, he managed to get the support from Sibu Municipal Council (SMC) to hold the first SIDF in Sibu in 2012 which was a success.

As part of the effort to promote Sibu, Chen would try to bring the participants to longhouses and tour the town and tasting the different food the town has to offer.

He said most of the participants are very impressed with the town and its people.

He said welcoming nights allowed for interaction among all the troupes, through the workshops, performers could learn different kinds of dances while exchanging different ideas and research through conferences, and outdoor performances were staged at different natural settings.

He also said that outdoor performance were not easy and needed a lot of hard work.

With the success of the first event, Sarawak Tourism Board (STB) encouraged Chen to make the festival an annual event.

With another event in 2013 — popularity was gaining and the event got bigger.

He said he had received phone calls from outside Sarawak, asking about the performances and ticket reservations.

The success boosted Chen’s confidence to organise the festival every year, but funding, had been his biggest worry.

He said SIDF depended very much on sponsorships from private corporations.

“The government gave us RM20,000 this year, but the whole project cost about RM300,000,” he pointed out, thus asking for greater support from the government.

He said more funds are needed as SIDF subsidises troupes to come here.

“For example, for the Japanese troupe this year, we applied to the Japan foundation in Kuala Lumpur.

“The foundation agreed to sponsor part of the expenses so the burden would not be too heavy on us,” he explained.

He hoped that STB would put SIDF in the Sarawak Tourism Calendar.

Meanwhile, the work on the fourth SIDF had already started and he hoped more international troupes could participate in the event next year.

He also hoped for a more active participation from the local folk.

“They don’t have to be professional dancers, just join us and learn,” he said.

Meanwhile, Chen who has a degree in Chinese Literature from National Taiwan University (NTU) started his formal dance training in Ballet and Contemporary Dance in Taiwan in 1984.

He then continued his second degree in Chinese Folk Dance in Beijing Dance Academy.

While doing his second degree, he took up courses in music and dances at a university next to Beijing Dance Academy.

Later, he took up Masters in Choreography in Melbourne University in 2000.